Wisdom From Our Theater Friends

Sometimes I read books in fields tangential to publishing to see if I can find a new way to look at a writing issue. Currently I'm re-reading Sonia Moore's "The Stanislavski System" about acting technique because I find acting books contain useful tidbits about character. (And also because I was tearing my house apart looking for my Billy Mernit book, "Writing the Romantic Comedy," with the side effect that I now have a huge pile of rediscovered books I want to re-read.) (And yes, I found the Mernit, mis-shelved in baffling fashion with a stack of old chick lit novels. Go figure.) (Though, now that I think about it, that kind of makes sense.)

Anyway. Re-reading Moore, and ran across this paragraph which I thought I'd share. Not about character craft, but about audience relationship with the performance. From the chapter Elements of an Action, section Communion--

To make the meaning and logic of his actions understandable to the spectators, an actor must communicate with them indirectly, through his communion with other actors. ...[W]hen an actor has direct contact with spectators he becomes merely a reporter instead of a live character. This relationship disrupts the truth of the performance and distracts the audience from the play itself. An honest, unbroken communion between actors, on the other hand, holds the spectators' attention and makes them part of what takes place on stage.

This reminds me of a drawing we used in one of my dramatic writing classes in college. Character One and Character Two interact with each other, and the audience witnesses the interaction: 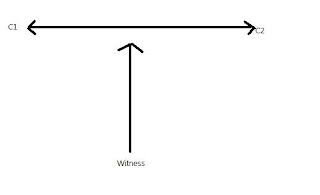 Please forgive my insanely crappy drawing skills. But despite my inARTiculateness *har*har* this drawing might make clear what we're talking about. It's about how a scene is perceived and how to control the attention of the viewer.

When we translate this concept to fiction, we're basically talking about point of view and the old "show, don't tell" rule. In other words, whether in theater or on the page, when characters interact directly with each other, the action is more interesting. When the characters interpret the action directly TO the reader-- whether through omniscient narration, exposition, or other methods -- it's less compelling.

Why is this? Dunno. Maybe we're just hardwired for it. I mean, what's more likely to capture your attention -- film footage of a train colliding into a car, or a guy with a mic talking about it? Direct experience just feels more compelling, even if we're merely witnessing that direct experience from a safe distance. I mean, nobody actually wants to be driving that car. But the film footage of the wreck itself might go viral.

So, how do we work this to our advantage in fiction? Use some of the things we've spent over three years exploring on this blog.

Do you see how these things sort of interrelate? They all have to do, more or less, with narrative distance between the reader and the characters. The default should be something closer, rather than farther, but the main thing is to become conscious of the ways you can push the reader back just by simple word choices and narrative choices.

A friend of mine just summed it up as 'describe, don't explain' which I find indefinitely easier to recogise than 'show, don't tell'. The main problem is that there are hundreds of mini-summaries slipping into my narrative. I'm on a mission to eliminate them.

Yes, that's a good way to think of it. I just liked this concept of talking to the audience -- because that's what it comes down to, really, even if it's done on a micro level.

Great post. I definitely feel a link between stage and page. In fact, I try to get into character (as my mc) before I start writing.