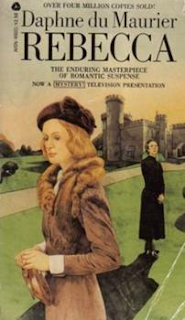 Here’s an example (from the wonderful Rebecca by Daphne du Maurier) of how theme and conflict can often best be conveyed by character action and interaction with concrete elements of the setting.
Here, the new bride finds a book that Maximilian’s late wife had given him as a gift, with her name scrawled on the frontispiece.
The book is a concrete object that can be handled and moved. It’s a stand-in or a symbol for the dead wife—the one that Maximilian won’t speak of and obviously can’t forget.

Read how the new bride interacts with the book, carefully cutting out the page with Rebecca’s writing, as if this would be like cutting Rebecca’s memory from Max’s mind.


There was the book of poems lying beside my bed. He had forgotten he had ever lent them to me. They could not mean much to him then. "Go on," whispered the demon, "open the title page; that's what you want to do, isn't it? Open the title page." Nonsense, I said, I'm only going to put the book with the rest of the things. I yawned. I wandered to the table beside the bed. I picked up the book. I caught my foot in the flex of the bedside lamp, and stumbled, the book falling from my hands onto the floor. It fell open, at the title page. "Max from Rebecca." She was dead, and one must not have thoughts about the dead. They slept in peace, the grass blew over their graves. How alive was her writing though, how full of force. Those curious, sloping letters. The blob of ink. Done yesterday. It was just as if it had been written yesterday. I took my nail scissors from the dressing-case and cut the page, looking over my shoulder like a criminal.

I cut the page right out of the book. I left no jagged edges, and the book looked white and clean when the page was gone. A new book, that had not been touched. I tore the page up in many little fragments and threw them into the wastepaper basket. Then I went and sat on the window seat again. But I kept thinking of the torn scraps in the basket, and after a moment I had to get up and look in the basket once more. Even now the ink stood up on the fragments thick and black, the writing was not destroyed. I took a box of matches and set fire to the fragments. The flame had a lovely light, staining the paper, curling the edges, making the slanting writing impossible to distinguish. The fragments fluttered to gray ashes. The letter R was the last to go, it twisted in the flame, it curled outwards for a moment, becoming larger than ever. Then it crumpled too; the flame destroyed it. It was not ashes even, it was feathery dust... I went and washed my hands in the basin. I felt better, much better. I had the clean new feeling that one has when the calendar is hung on the wall at the beginning of the year. January the 1st. I was aware of the same freshness, the same gay confidence.

The door opened and he came into the room.
From Rebecca by Daphne du Maurier

See how much more effective that is than just telling about her jealousy and insecurity. Notice how meticulously the action is narrated—how carefully she cut the page, how it burned. That helps bring the scene to life, and dramatizes the conflict.

Then the use of the page helps build the theme of the inescapability of the past. The book and writing become motifs (the recurrent images or patterns which help create the theme) of the permanence of past and memory.

Also, using an actual object as a symbol allows for all sorts of tricks like subtext and foreshadowing—the fire destroying the page foreshadows the fire that destroys their house and lives later in the book.

So think about a scene where you have a complex emotion or conflict. What is an object in the scene which can be used as symbolic or thematic in some way? What’s a plausible way the character can interact with it and make use of it? 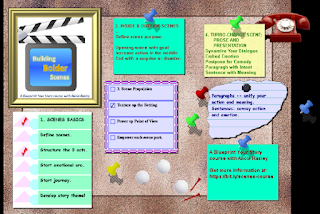 So if you're interested in reading more about the Scenes course and joining, here's the link again:  http://bit.ly/building-bolder-scenes

Feel free to share this with any writer friends. And have fun writing! And let me know if you have any questions!
Alicia  plotblueprint@gmail.com