Alas, I constantly edit, even when I'm not being paid for it, the author didn't ask for it, and I can't actually share it. It's just a compulsion that happens as I read, especially news stories that have presumably already been edited.

And heck, why not share the compulsion here? Maybe someone will learn from it. I do 'revision sessions' sometimes with students, just editing on-screen and explaining as I go, and this misplaced modifier problem is one of the most common and also one of the most easily fixed mistakes.

In a sentence, a "modifier" is a word or phrase or clause which "modifies" or deepens or narrows the meaning of another part of the sentence. The most common modifiers are the one-word adjectives and adverbs which add to the meaning of a noun or verb, like: The girl's outfit proudly proclaimed her Ukrainian heritage.

But often the modifier can be an entire phrase:

Or the modifier can be an entire clause (with a noun and verb):

Some modifiers are "bound"-- that is, they have to be in a particular position, like just before the noun they modify. You know-- The pink dress. (Not --  The dress pink.) These "bound" modifiers are usually single words or short phrases that modify a noun (that is, they are "adjectival," which means "modifies the noun" :).

Usually, however, modifiers are unbound, especially the phrase and clause ones, and therein lies the problem. An unbound modifier can "legally" be moved around to different parts of the sentence, but what's possible isn't always what you mean. Sometimes being too free-range with modifiers creates the horrific crime of a dangler, where impossible and sometimes painful things happen:

One day she hunted for a moose wearing diamond earrings.

Decisively blocking the knife, her eyes narrowed with purpose.

I have a lot of examples of this kind of mistake, but just for now, let's fix an easy one, adapted from a sentence in a major mag article:

She admitted her enjoyment of the bullying on Facebook last year.

Many misplaced phrases have to do with time or place-- the "where and when" of the sentence. I see this most often when there are more than one actions in the sentence, as here:

She /admitted /her enjoyment /of the bullying. (Ignore the "on Facebook" and "last year" for a moment so we can focus on the kernel sentence.)

We usually think of action as being represented by the sentence verb (here, admitted), but actions can also be shown in nouns (participation, bullying). So here there are three actions, all of which took place but perhaps not all at once. 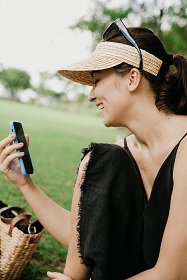 ...of the bullying last year.

(I know it's not a great sentence because I modified it to protect the guilty. :)

Because the author placed the where/when modifiers at the end of the sentence, right after "bullying", readers will be forced to assume that the bullying took place last year on Facebook. And that might be exactly what happened (although it's not in this case).

But... what if that's not right? What if the bullying took place last year at school, and she enjoyed viewing a video about it last week, and is only admitting it on Facebook?

(Some of this info might have been revealed in previous sentences, though not in this case. And still, that's no excuse for imprecision in this sentence. When all it takes is a moment to get it right, make it right. :)

What's a revision which makes those very clear so that the readers won't be confused about what happened when and where?

On Facebook, she admitted her enjoyment of the bullying last year.

She admitted on Facebook her enjoyment of the bullying last year.

She admitted on Facebook her enjoyment of last year's bullying.

This is just one sentence and one set of facts, and one point of misplacement. Though I will try, there's no way to identify every possible opportunity for imprecision.

There are as many options as there are possible permutations of actions and actors and conditions in any sentence. But ONLY ONE IS CORRECT. This isn't about delicate subtext or deliberate ambiguity or debated issues. This is just about placing factual information in the correct place in the sentence. You can get it right as easily as you can get it wrong. But you have to recognize when it's wrong, and then make it right.

Anyhoo, point is: Be sensitive to the meaning you create when you put a modifier somewhere in the sentence. Stop and think about the various interpretations the readers might make of this placement, and whether moving the modifier might make more sense. Time and/or place modifiers are especially tricky.

So if I mean the ADMISSION, not the enjoyment or the bullying, took place on Facebook, I have two easy options (the first being optimal). While we're at it, let's make clear it was the bullying and not the admission that took place last year.

On Facebook, she admitted her enjoyment in the bullying last year.

She admitted on Facebook her enjoyment in last year's bullying.

I have a bunch more examples that I'll post and fix in the future. Usually in order not to shame the writers and editors (who, grumble grumble, should know better), I'll change the words and keep the construction.

This is what passes for giggly gossip in my life. :)

A blast from the past-

The columnist James Kilpatrick used to devote his first column of the year to the many ways you can place and misplace the word "only" as a modifier in a sentence, and used this example to show the difference in meaning:

(Wouldn't you say "ON the nose"? I would. I'm not sure how deep I would want to hit IN the nose.)

"Almost" and "already" and "just" are other common modifiers that can be moved almost anywhere, but each placement means something different.

Here is a nice British professor who does a great job of showing how to determine what a modifier modifies and how it works in a sentence.

You can find some good examples of misplaced modifiers at this Guelph University site.