Deepen your characterization with the Heroic Flaw

The Heroic Flaw: To deepen your characterization, learn to create "The Heroic Flaw": That which makes them great brings them down! We'll discuss how to use the character's great strength against them, to bring them into conflict, and force them to change.
This workshop will be presented Feb. 12 by Alicia Rasley, award-winning writer, experienced editor, and affirmative teacher.

Sign up here! Even if you can't attend then, sign up and I'll send a replay link after. 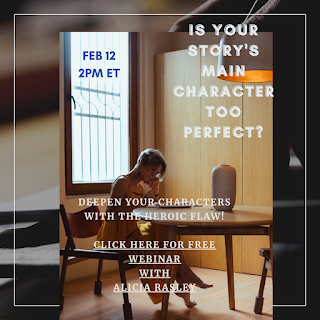 Starting with Idea: The Thought-driven Story

Let's talk today about “idea” as a way to start a story. Some stories, especially those classified as “speculative fiction,” start not with anything concrete like character or setting, but with an idea to be explored.

As science fiction writer Orson Scott Card explains, “Idea stories are about the process of seeking and discovering new information through the eyes of characters who are driven to make the discoveries.”

That’s really the appeal of an idea story. No matter what it turns out to be, it starts as an intellectual puzzle. In the spirit of that sort of intellectual mission, let’s consider some ways an idea can start a story.

Questions. For example, many mysteries start with a scene that presents a question, one of the oldest questions of all, “Whodunnit?” But most authors add some additional complication, like, what could kill a man alone in a locked room? (Edgar Allan Poe’s seminal detective story, “Murders in the Rue Morgue,” was perhaps the first to pose that question.) The point of these “idea-mysteries” is to challenge the intellect of the sleuth (and author and reader) to go beyond the expected and familiar to speculate, innovate, and interrelate clues to come up with possible though unlikely solutions.

What-ifs. This is a specialized question that truly is speculative, as it seeks to imagine something that hasn’t happened (and probably won’t). This is more of an experiment than an exploration. A good recent example is The Martian, which poses the question, “What if an astronaut was left behind on Mars?” A great classic example is Oedipus the King, which asks, “What if the detective learns he’s actually the murderer?”

There’s also a what-if variety that experiments with the past. Alternative histories like Harry Turtledove’s The Great War inspire the author and reader to consider how the present might be changed if an important past event were changed. These alternative histories have a point beyond the mere alteration, however. Philip K. Dick’s “Man in the High Castle” takes the question “What if the Nazis had taken over the United States?” to pose the deeper question, “Would Americans resist?”

Themes. A theme is a message, a “moral to the story,” that can usually be stated in a sentence, but is better developed through story events. The film Chinatown, for example, uses the “water wars” of southern California to explore the theme of “Absolute power corrupts absolutely.”

The difficult task in theme-based stories is to avoid being preachy. I’d suggest having the theme in mind and creating characters who have to discover that truth, but only at the END of the story. That way, the theme evolution will be a more organic process.

Perspective. A perspective-based story requires, you guessed it, an alteration of perspective, demonstrating that what you see is dictated partly by where you’re seeing from. Charles Dickens’s A Tale of Two Cities juxtaposes the experience of the French Revolution in Paris with that of London, that of a victim with that of an observer. A variation of this perspective-test is the “fish out of water” plot, where our world is viewed through the eyes of an alien or stranger.

In my opinion, this is one of the most socially important genres, as it forces our notoriously solipsistic species to examine ourselves objectively—something more and more essential in a diverse culture.

Concepts. A concept is the simplest and yet most profound of ideas, often expressed in a single word— Freedom. Dispossession. Exile. The speculative aspect of this comes from recognizing that simple concepts are actually the opposite of simple and that only a story and a character can truly portray the complexities. For example, the film Casablanca explores the concept of “neutrality” through the cynical and detached character of Rick, a symbol of the isolationist United States trying to stay isolated in those dark months before Pearl Harbor.

Starting with the concept but developing it through the complications of a 3-D person within a culture is a good way to avoid the sort of closed system that readers of speculative fiction loathe.

Twists. This story takes something conventional and twists it to produce something both familiar and exotic. You’ll often see this in novels aimed at teens and pre-teens, as connecting the normal with the unusual trains them in the important mental skill of skepticism and imagination. 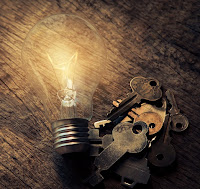 The trick here is to make the base story perfectly plausible (Harry Potter really is going to boarding school and taking courses, but they’re about incantations and potions), so that the twist is more fun, making the familiar unfamiliar.

All of these idea types pose the risk of becoming just tricks. To avoid that risk, consider that each of these should lead to a deeper question, and that is in the end what we want to explore in the story.

When I read Ender’s Game, for example, the "twist" is clear-- (spoiler warning) the children thought they were training on a videogame to stop an alien invasion, but in the end, it turns out the game was real and they'd just stopped the invasion. But I found the deeper question to be, “Why do we sacrifice our children for war?” That deeper question leads to the plot development that the adults deceive the children that war is just a game.

Another way to make an idea into a full-fledged story is to embody the idea inside a character’s journey. Ask yourself who needs to learn this theme or experience this twist? Oedipus, for example, is an arrogant man who will not accept the power of the gods over him. So he has to be forcibly confronted with the fact that they control his fate.

The most successful idea stories start with an idea… but they don’t end there. The idea is more than just a statement or speculation, but rather a process whereby the reader and characters experience the idea and come to understand what it really means.