Editor's Note: We're very proud to have Adrienne Giordano for one of our rare guest posts today. Adrienne is one of those marvels who managed to sell the first book she ever wrote. And the second, and the third, and the fourth, and we see no limit to her success. When she suggested using one of our email exchanges as the basis for a post on technique, I was all for it, even if it does show my tendency to rush and confuse things. Who me, in a hurry? *ggg* Adrienne's book "Man Law" debuted at #1 at Carina this week. Congratulations, Adrienne! ~Theresa

Not long ago my editor suggested something that scared the hell out me. We were working on content revisions, trying to bring in relevant backstory when she said she might like to see a flashback.

I steadied myself and reread the email. Seriously? A flashback? Once the immediate panic subsided, because, let's face it, for years I'd been avoiding writing flashbacks. Flashbacks to me were the equivalent of climbing Everest. All I'd heard was how hard they were and how authors blow it more often than not. Still, the idea intrigued me so I agreed to try it.

I immediately turned to my bookshelf and all those patiently waiting craft books. After reading through a few of the books, I discovered a fantastic section on flashbacks in Writing Fiction by Janet Burroway. If you don't have this book on your shelf, I highly recommend it. Our own Theresa Stevens suggested it to me years ago and it is by far the book I use most.

So, I studied the Burroway instructions and settled down to work on my flashback. By the time I was done, I realized I had a big problem. The flashback itself was fine, but my transitions into and out of the flashback were in serious need of help. Then I did what I always do when I'm stuck.

I asked Theresa for help.

And that's when things really got crazy and I learned about framing. What follows are the emails Theresa and I exchanged starting with my initial question.
Adrienne: I used a look he gave her to start the flashback (see below). Can I end the flashback somehow tying it to the same look?

Enough of this already. Because, really, she didn't have time. She was getting nowhere with him when all she wanted was to get somewhere. And then he went and did it. He tilted his head and parted his lips just so slightly and a burst of heat shot through her. At any second, it would occur to him that he should attempt to mask his feelings. The idiot hadn't yet realized his ability to hide from her evaporated two years ago in her basement. That had been the first time she'd noticed the look and it still tortured her.

"Holy shit," he had said when he saw her on top of the dryer literally being hosed with water shooting from the pipe.

He snorted. "Am I? Have I said anything that's not true?"

No, he hadn’t said anything that wasn’t true. And now Vic stood in front of her giving her the look that had started it all. After the basement incident Vic had kept his hands, among other things, to himself. He'd been cordial. Disgustingly so. Like too much syrup on a stack of pancakes and the sweetness made her ill. At times, she caught him staring at her and it infuriated her because they had never once discussed it. That's how it had been until Mike's wedding and their second act of spontaneous humping.

It's a little too abstract. The look can be a trigger, but let it trigger something concrete in the real world -- use a prop or setting detail that you can return to later.

Anchor it with something concrete.

No wonder people don’t try these damned flashbacks! They are hard.

That hair-pushing thing is character -- it's a gesture used to signal a character's internal state. You want setting or a prop. A concrete object from the environment. Something not a part of a character's body or body language.

Sorry to harp on this, but it's important. The longer the flashback, the heavier the anchor in the frames must be. Otherwise the reader might miss the frame and lost track of story time. For a short flashback, no more than a page of text, a character gesture might work -- tricky, but it might work. Better, really, to save that kind of frame for time breaks of no more than a few sentences.

At this point, I was beginning to doubt my ability to pull this flasback off. I just wasn't understaning this concrete detail bit. Then it hit me that I could use the hallway they were standing in as my anchor. The hallway was a concrete detail.

After all the back and forth with my ever-patient friend, here is the revised start to the flashback.

Enough of this already. Because, really, she didn’t have time. She was getting nowhere with him when all she wanted was to get somewhere. And then he went and did it. He tilted his head and parted his lips just so slightly and a burst of heat exploded inside her. Suddenly, the hallway seemed tight. Closing in as his stare filled the space. At any second, it would occur to him that he should attempt to mask his feelings. The idiot hadn’t yet realized his ability to hide from her dissolved two years ago in her basement. That had been the first time she’d noticed the look and it still tortured her. Damn him for bringing it all back.

Her fingers twitched at the memory. Kneeling on top of the dryer battling the water that had shot from the pipe and doused her. And Vic staring at her in a way that made her miss having a man to curl up with.

Gina huffed out a breath. “Knock it off. You don’t know a thing about what went on here. You’re completely out of line.”

He snorted. “Am I? Have I said anything that’s not true?”

No, he hadn’t said anything that wasn’t true. And now, Vic stood before her giving her the look that once again made her feel like the damned hallway had shrunk. After the basement incident Vic had kept those big hands of his, among other things, to himself. He’d been cordial. Disgustingly so. Like too much syrup on a stack of pancakes, and the sweetness made her ill. At times, she caught him staring and it infuriated her because they had never once discussed it.

That was how it had been until Mike’s wedding and their second act of spontaneous passion.


Can you see the difference? How that simple concrete detail pulls it all together? It seems so easy, but I assure you, flashbacks are a tricky beast. The shifting verb tenses alone are enough to send me to chocolate. Verb tenses aside, once you have that concrete detail to frame the scene it allows you to easily shift in and out of the flashback.

What about you? Have you ever tackled a flasback? Did you frame the scene? 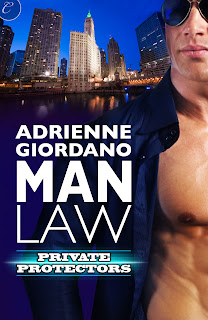 Adrienne's Bio: Adrienne Giordano writes romantic suspense and women's fiction. She is a Jersey girl at heart, but now lives in the Chicago area with her work-a-holic husband, sports obsessed son and Buddy the Wheaton Terrorist (Terrier). She is a co-founder of Romance University blog. Adrienne's books have been finalists in the 2008, 2009 Linda Howard Award of Excellence contests. Adrienne also received first place honors in the 2011 Linda Howard contest. Her debut romantic suspense, Man Law, will be released by Carina Press on July 4, 2011. Her second book, A Just Deception, will be available from Carina Press on September 5, 2011.
For more information please visit www.AdrienneGiordano.com.
Follow Adrienne on Twitter @AdriennGiordano
or http://www.facebook.com/AdrienneGiordanoAuthor.

Man Law now available
at Amazon
at Carina
in the Nookstore

People have flashbacks all of the time.

Comparing the present with the past is an everyday necessity — if no-one believes this, try giving it up for Lent.

But as with everything in fiction, flashbacks have to be treated with care.

All too easily flashbacks can become a sideshow.

In flashing back for the fictional being(s) concerned, they must also flash forward for the reader in a Writer Has Total Control Of The Mechanics Of Time kind of a way.

Flashbacks in a novel have the kind of foresight we don't have in real life.