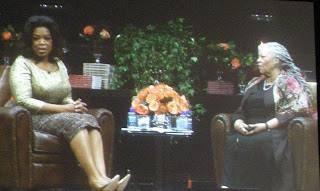 My poor little digital camera really got a workout last night, and it didn't quite stand up to the task of photographing the stage. The lighting in the room made things tricky to begin with, and we were in the cheap seats. ("Cheap" in this case meaning a thousand dollars a plate. The library foundation raised over $1.1m last night. Woohoo!)

In any case, that's the only photo that comes even close to showing the glory and beauty of those two ladies. Toni Morrison, on the right, was wearing the prettiest brocade shawl edged with beaded fringe. I wish the picture did it justice.

I did take a lot of photos, some of which are at the bottom of this post, but let's start with a recap of Toni Morrison's comments. What a charming, sassy, brilliant lady. She is so poised, and she slipped with ease and grace from joking to deeper, more serious commentary. I could have listened to her for hours -- hell, days -- and been fascinated throughout.

She discussed her process a bit. Here's a surprise. She doesn't read at all when she's writing a novel. At all. She's composing a new novel now, and she said someone sent her a book, and she started looking at the first pages but had to hide it away because it was too good. She wanted to read it, but couldn't allow herself to do so. This contradicts what so many of us are told -- read, read, and read some more -- but it just goes to show you that there's no accounting for process. We all must do what suits us best, and in her case, she doesn't want to get caught up in someone else's sentences when she's trying to stay caught up in her own.

She referenced sentences several times throughout her talk, and I came away with the impression that for her, sentences are really where it's at. Not vocabulary (she describes her word choices as "plain" and "ordinary"), and not scene (which she never mentioned in the context of process), or structure (which she only mentioned once, when quoting a review of "The Bluest Eye" that panned the book for having no beginning, no middle, and no end). But over and over, she referenced sentences and how she likes to play with them, how she reads for sentences when she does read, and so on. I kinda dig that, and I think it shows in her work.

She also talked a lot about character, and for her, the generative process seems to be built largely around the task of creating characters. She said she starts by assembling the cast and learning their names. Then she "listens" to them -- she got several laughs by describing how they won't shut up and only ever want to talk about themselves -- until she understands them "in the marrow." And then, she said, she just puts them together and watches the book unfold. She spoke frankly about her failures when she had time to write, and did write, but didn't yet understand the characters deeply enough. She talked a lot in terms of active preparation for the moment when the writing would be ready for her. I had a hard time gauging how long this part of her process lasts, but it sounds as though it could be several months. She says she does other kinds of writing during these periods, but doesn't read.

She also talked about how things in publishing have changed since her first book in 1970ish, and she spoke in strongly positive terms. She says things have changed much for the better. She said in her early days, serious books by African-American authors were expected to be read only by white readers. Here's one of my favorite quotes from the evening: "Invisible Man? Invisible to whom? He's not invisible to me."

So against this backdrop, she aimed to write a book that would not be too "simple" (which is how she described books aimed at African-American readers back then) but that would be culturally authentic. She spoke candidly of her dismal sales in the early days and of her confidence that the books were good, regardless of the readership. (She has a lot of confidence in her work, and she's always careful to distinguish between her work and herself. I found that sense of separation interesting.)

Her breakout book was "Song of Solomon," which is a personal favorite of mine. When asked why that book was able to break through to a bigger readership, she said it was because the main characters were men and were therefore more appealing to a wider readership. It's worth noting, though, that by this time her books were appearing on university reading lists, and the new generation of readers might have acquired a taste for her prose style. I can't prove that to be the case, but her readership was certainly growing by then.

In any event, she says that things are much better now for African-American readers and authors, and that there's more crossover these days. (My opinion -- probably still not enough, but we're making progress, I hope.)

One thing she said that surprised me, and I'm not sure I can agree with her on it. Oprah asked her for her reaction to having her books slotted in with magic realism. Toni Morrison claimed that magic realism is a literary ghetto, made so by a small group of British literary critics who adopted a sort of post-colonial colonialist attitude when discussing the works of Garcia Marquez and other magical realists. She said they would never apply the term magic realism to the work of a European writer, and she specifically cited Kafka's Metamorphosis as an example. But even if I can appreciate this sentiment, I can't get behind that example. Some analysts have slotted Kafka in with the magical realists, though most call him a modernist, surrealist, existentialist, etc. He's just hard to pin down, I think, both because his work was so innovative and because it spawned so much diverse literary energy in other writers. But that's a minor quibble.

Want to see some photos now?

When we first arrived at the venue, there was a cocktail and canape thing happening in a large curtained-off room. A jazz band was playing, and though I'm not generally a big fan of jazz, I thought this music set the perfect tone. Also, the quail's eggs were delish, and I'm told the steak tartare was worth a try. 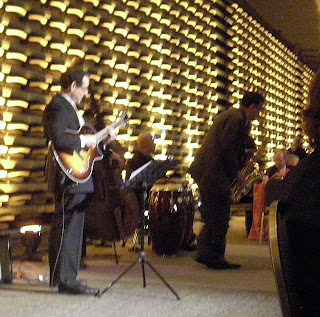 When we entered the main banquet hall, the walls were lit with photos of the libraries and with quotes about libraries and books. These slide shows were very nicely done. Though, really, the whole event was so beautifully composed that even if Toni Morrison hadn't spoken, it would have been a memorable night. The table centerpieces were green-shaded library lamps and stacks of freebie books, another artfully composed touch.

Some of the quotes:

Some of the library snapshots:

So, you want to know what you eat when the ticket price starts at four figures? It ain't a rubber chicken plate, I promise you that. We started with quiche and an amazing field greens and olive salad. 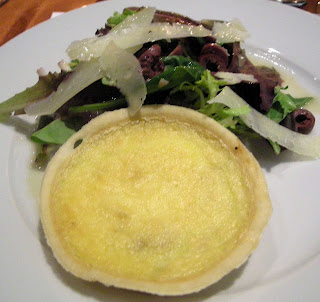 Then us vegetarians had butternut squash ravioli seasoned with nutmeg -- so incredibly good that I think I will forever sprinkle my squash with nutmeg in tribute to this dish. 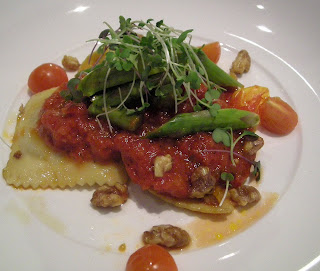 The carnivores had a nice filet with peas and pearl onions and pot stickers. 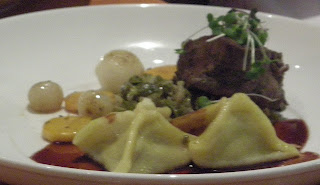 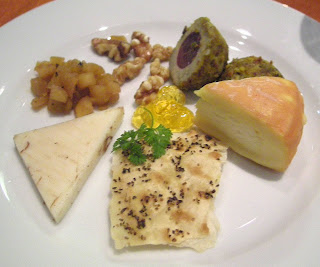 There were a few sweets served with the cheeses, too, like this pistachio and cranberry chunky stuff. 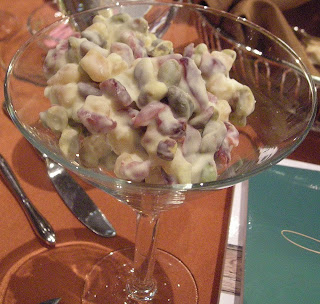 And some really delicious truffles. 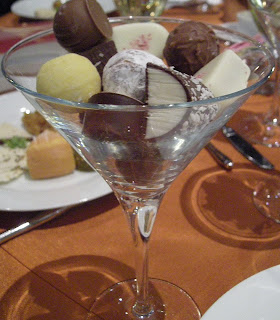 But that wasn't dessert. Dessert was served in a separate room, buffet style, as Eula Biss signed her books. Here's a terribly lit picture of Eula Biss signing: 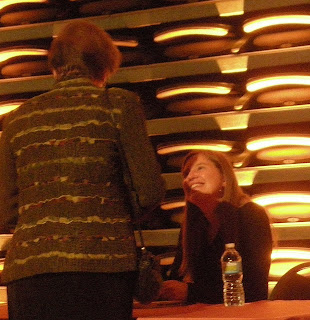 She's an essayist and another award-winner last night, and her speech about the power and meaning of libraries was so moving that I think I'll have no choice but to read all her books now. She's got a quiet grace that was very appealing.

One final note. There was a short tribute to the outgoing Mayor Daley, or Hizzoner the Younger as he's sometimes known around here. I pay very little attention to local politics (mainly because I never planned on staying here for long), but even my fleeting notice has managed to observe how good he's been for the city. He's cut the ribbons on 54 libraries during his tenure, and that alone will make him a tough act to follow.

I have so much admiration for Toni Morrison! This was a great post. Thanks a lot for sharing haha it was a nice read before some studying.

fantastic to get your shots and notes from the event. Love it. Thanks.

Thanks for a wonderful vicarious experience.

Sounds like you had a truly memorable night, Theresa! Glad you enjoyed it, since I know how much you were looking forward to it.

Funny, I never read books while I'm writing either, but I would never dare compare my process to the brilliant Toni Morrison's!

Her comments on characters resonated with me. Wish I could write like her.

Great pics of the food BTW.