15 Questions to Get into Your Character and Setting

15 Questions to Get into Your Character and Setting

I'm working on a 7-day "writer's block buster" program, and have "listing" as one of the techniques.

This exploration doesn't exactly fit into that exercise, but I wanted to post it here because it's sort of similar, and .... well, I think it's useful when we feel like we can't really get into the emotions and perceptions of our character. I'll  list the questions so you can try this if you want, then give an example of what I did with it. What I like is by keeping it all pithy-- one line for each question-- I was forced to focus on the most evocative details. It's a really good way to go deep quickly.

So this is adapted from an exercise by Les Edgerton, who wrote the great Writer's Digest book Voice.

It's about getting into character and FEELING the setting in this scene, and then letting the setting details lead to the character emotion.

Read each question aloud and then jot down its answer without pausing. As the scene opens, become the scene POV character– YOU are the character. 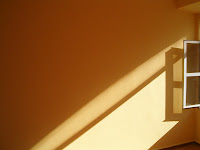 What do you see right around you?

What time is it? What is the light like?

What is your body doing?

What do you hear right this moment?

What do you think that sound is?

What do you feel under your feet?

What do you feel in your hands?

What do you feel on your face?

What do you feel in your heart?

What do you smell?

What do you taste in your mouth?

Who is with you?

What do you hope will happen?

What do you fear will happen?

Okay, what did you learn about your character and setting????  And, most important, now that you know all that, how are you going to use it in your scene?

So here's an example of how I used this free-association exercise as a way to feel the setting from inside the character.

(Carrie's point of view-- at her gran's cottage after the funeral)
Where are you?
Kitchen of Gran's cottage.

What do you see right around you?
The yellow vinyl breakfast nook booth, the old sink with the window above it and a dirty pot soaking.

What time is it? What is the light like?
Twilight. Darkness edging outside. I have turned the overhead light on and the porchlight too.

What is your body doing?
Standing at sink, hands in soapy water.

What do you hear right this moment?
Muffled voices out in the living room. Water splashing under my hands.

What do you think that sound is?
The friends who came to Gran's wake are saying goodbye to my husband Josh. I should be out there to thank them for coming.

What do you feel under your feet?
The old yellow linoleum floor. Now Gran will let me replace it.

What do you feel in your hands?
Water. Soap. The aluminum pot. Bits of gritty food from the pot. 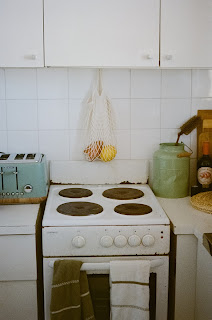 What do you feel on your face?
Dried tears. Dried soap where I touched.

What do you feel in your heart?
Lostness. Anger.

What do you smell?
Dishwasher soap. The last remains of the haloupki Mrs. Novak brought--
tomato and cabbage.

What do you taste in your mouth?
Hard water from the well. Bitter.

Who is with you?
Gran's friends. Aunt Barb. My husband Josh. My high school sweetheart Zach. They're all out in the living room. But I'm alone here in the kitchen.

What do you hope will happen?
That everyone will leave. Josh too.

What do you fear will happen?
That everyone will leave. Josh too. 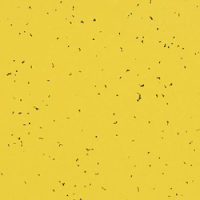 Just freewriting that made me realize how estranged she was from her husband, and how this funeral made that clear. The washing the dishes, avoiding him, in Gran's kitchen, that made their estrangement resonant.
------
Analyze and Apply

Work for the emotion. Locate it. Embed it in the details. Make the character interact with the setting– but make the interaction manifest the emotion. So she's not in the living room crying with the other mourners– she's washing dishes in the kitchen, so we get the idea she's avoiding everyone. The water is warm but gritty with food bits. What does that say? Heck, I don't know, but it's sad without saying it's sad... like even this cleansing activity isn't so cleansing, just like the ritual of the funeral doesn't actually provide much closure. Everything in the kitchen reminds her of Gran, but not in a simple way– she thinks  of the yellow linoleum Gran never let her replace, for example.

Maybe she'd been crying, but now the tears are dry on her face.

One thing about real emotion is that it's not black-and-white. It's kinda complicated. It's not always direct. So she loved her Gran, but it's hard to face her death straight on. So where is Gran? And where isn't she?
Gran's in that old kitchen– the memory is there. But not in the obvious things like a framed needlework. Look for something a bit off– the peeling yellow linoleum Gran didn't let Carrie replace.
When my grandmother died, we were all flummoxed about what to do with those awful commemorative plates that she had mounted on the wall by the dinette. She used to ask everyone she knew who went on vacation to bring back a plate for her. So there was a plate with the outline of the
, and one that proclaimed Wisconsin Dells! You know the sort of plate I mean.
Well, none of us wanted them, but we couldn't throw them away. We ended up giving them to an old aunt, who wept over them like they were the Faberge Easter Egg collection. Anyway, doesn't that tell
you something about my grandma? And about me, that I loved her but really didn't want her dumb plates?

Use such details if you can. Objects carry emotional significance. Let's say after the funeral you're delegated to go through your grandmother's clothes to sort them out to give to Goodwill. What one item can you not give away? That item has emotional significance. You don't have to know why exactly ("I can smell her Emeraude perfume?") but it matters to you, right? Well, you don't necessarily have to know why you put this object there in the scene, but if it resonates within you, there's a reason.

I asked this at a workshop, and a woman in the front row said, with a breaking voice, "I kept a flannel shirt my husband wore." She knew exactly what I meant– because she'd done it herself, kept one item of emotional significance after her husband's death.

Avoid the generic. Don't go quirky for quirky's sake, but when it comes to objects, don't choose the same one everyone would choose. Let's say you have a young woman who is about to go off to college. What surprising item does she take with her? What does she leave behind?
If she takes the photobooth picture of her and her best friend and leaves behind her old teddy bear, the reader isn't going to get much of a charge, because that's kind of generic. If she takes, oh, let's see, her piggy bank and leaves behind her passport... hmm. Now that means something unique. Don't know what... but the reader will figure it out. "She's afraid that she'll just leave– never go back. So she leaves her passport so that she can't just take off. She can't just leave home forever." Well, okay, maybe...
all I know is when I challenged my subconscious, that's what it told me.

Give your character something to do in the scene. I tend to write dialogue-heavy scenes, where all they are doing is talking (in a fascinating way, of course :). But if I put them in a meaningful setting,
or make it meaningful, and think about what there is to do in that setting, what objects are nearby. Give them a task, even if it's just getting dressed or washing the dishes. One writer told me she had a
character talking while he cleaned a gun, then when he finished, he loaded the gun and shot the person he was talking to! Now that's using an object to show emotion. :)

Just remember not to get heavyhanded, 10th grade English class symbolic mode. Instead of using generic symbols (the lowering sky, the cross reflected in the puddle), think about what object would have symbolic, emotional,or metaphorical significance to this character. We don't have to love
antique thimbles ourselves as long as we understand that this thimble signifies something important to the heroine. We can utterly hate muscle cars as ecologically unsound gas guzzlers, but we can still "feel" for the guy when he discovers a scratch on the GTO he restored with his older brother.

Look for objects which matter to the characters, and then let them work with them, use them. Also consider putting those objects at risk. Or have the objects put them at risk. Let's face it, people have DIED running back into their burning house to save a photo album or Mom's embroidered
pillowcases. My sister and I used to groan about my parents who kept this horrible old skillet of my grandma's, with a bad handle that rotates and dumps the hot food on your feet half the time. Not only would my parents not throw it away, they still used it every day! My sis and I talked about stealing it and burying it in the woods. :)

And you  know what? When my parents died, my sister grabbed that skillet, and still uses it. And I bet she still hasn't fixed the handle. 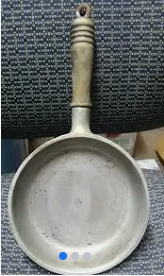