Commas to set off introductory elements-- rationale for the "always" 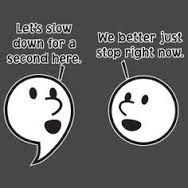 I've been working with students on the purpose behind punctuation, so that they can feel like they don't have to learn a bunch of arbitrary rules or else spend the rest of their life kind of randomly sticking commas here and there.

While there are a lot of rules (and some dispute about them!), I do think it will help writing students to keep in mind there is a purpose-- this is not arbitrary-- and the purpose is grouping words and phrases that belong together in the sentence.

One of the most common "dropped comma" opportunities is the introductory element in a sentence. More and more, I'm seeing students (and other writers) discard what I think is often essential for the reader to get what goes with what-- what the real meaning is.


Punctuation's main purpose is to signal to the reader what parts of the sentence go together.  For example, in this sentence done without the comma (which is, cough, becoming all too common in magazine and web articles):
After he completed the fields in the application document all the software apps he needed for regeneration were automatically downloaded to his brain. 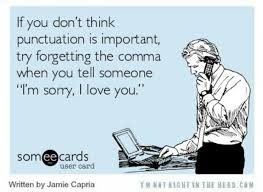 (Yes, I know, ugly sentence, but it's a close copy of an actual sentence I came across, and is a good illustration of my point. We'd all rewrite that, I know! But just for now, let's let it be there in all its ugly so I can use that introductory element.)


That long a sentence, really, I'd be looking for a place to punctuate (a GOOD place) even if there weren't an appropriate rule. That many nouns all in a line-- the reader will get lost. And the most important of those nouns (for our purpose here) is "document" (at the end of the introductory clause), and that can also be a verb, especially when followed by "software." ("One of my jobs at Compudesign was to document the software.") Hang on to that thought about nouns that can also be verbs, as that's a common problem with these sorts of sentences.

We don't want the reader to get lost! Fortunately, I don't have to invent an excuse to punctuate and slow down that cascade of nouns. I can figure out what the elements are in the sentence:
Introductory element supplying some condition or information: After he completed the fields in the application document

...the introductory clause After he completed the fields in the application document creates a different "unit of meaning" than the main clause beginning "all the software apps". If you separate those with a comma, the reader won't run the two together --  document all the software apps. Sometimes without the comma, when we let the last word of the intro element run into the first words of the main clause, the reader will get confused. It’s especially confusing when the word at the end of the intro element can be either a noun—a thing or name—or a verb—an action. "Document" would generally be assumed to be a noun... but not when it's right by "all the software," because "documenting software" is an actual task.

In English, there are many words that started as mere nouns and then became also verbs, and vice versa. Here are just a few that I've seen at the end of intro elements:
time
report
comment
mention
demand
command
order
walk
talk
sight
survey
transport
bus
carpool
pool
harpoon
polish
...
Can you think of more? I know that you can. :) Hey, "CAN" would apply also.
And we don't even want to get into adjectives that can also be past-tense verbs (because a past participle, which is often identical to the past tense, can be used as an adjective, like "brushed" and "enlightened" and "solicited).
When a intro element ends with a word like “time” or “report” that could be either a noun or a verb, the reader might automatically connect it as a verb to the next word—time it, report that….)

So if we don't routinely use the comma to separate intro from main, quite often the reader will rush past the end of the intro to the start of the main and stop. Confused. What?
At that time the swimmers...
In the report your comings and goings...
When she read through the survey the new highway....
After I started to walk down the street was the store where...
Since I already had everything in order the children....

Eventually the reader will go back and pick out what goes with what, and, well, mentally insert the comma we left out. Because I deal with so many student papers, I see many such sentences, and every time, I -- a trained reader, teacher, editor, writer-- pause, regroup, re-read. If I'm confused even when I'm carefully reading, imagine how confused the skimming reader will be.

We want readers to pause over our brilliant insights, not our confusing syntax.  And even a moment where the readers are confused and have to re-read brings the danger of losing their attention, and, indeed, their trust in our ability to control our own meaning..

Hence the rule: Introductory phrases and clauses should be set off from the main sentence with a comma:

This is pretty easy to fix as you revise, once you get used to recognizing these introductory clauses and phrases. They'll be at the beginning of the sentence, but the main part of the sentence, the main subject and verb clause, will be after that. It's just a matter of finding where the intro phrase or clause is, and where the main clause begins, and putting a comma to separate them. Some examples (intro phrase or clause bolded):
Intro phrases:
Therefore, Napoleon's invasion of Russia led to his doom.
In 1815, Wellington won the battle of Waterloo.
Well, I don’t know about that.
After that, she went to the university to study biology.
Already knowing everything, my teenaged son won't listen to me.
Garish with red and blue stripes, his shirt clashed with everything.

Intro clauses:
Even after Jane drank the warm milk, she couldn't fall asleep.
When she was 16, her parents bought the house in Surrey.
When I asked, he couldn't explain.
Before it starts to rain, let's finish painting the garage door.


Recently, I've been seeing many writers discard this in most of their sentences. I really don't get the rationale of not using this comma routinely.  Running together your intro and your main clause will almost always create confusion, and most of the time you won't want to create confusion.

Then-- if you usually follow this rule-- when you choose NOT to use it, to energize the flow of the sentence to create more of a sense of action say, your choice will stand out as meaningful. There's no meaning in breaking a rule you never follow anyway... so if a writer wants the additional speed and flow of NOT using that comma, following the rule most of the time will make the occasional rule-break stand out as significant.

To restate:
Breaking a rule you don't follow anyway provides no additional value or meaning.
Rebels need something to rebel against. :)
"Always and never" make the exception possible.


I would love some better examples of sentences that confuse, so if you come across some in your reading, can you let me know? Real examples are so much more... real... than the ones I make up.
Also, if you have examples of sentences where you've broken a rule (esp. this rule) for a particular effect, can you post that too and why you did it? I need good rule-break examples also, to show the contrast between accidental and intentional. Thanks, all!

Is the comma before a name (title, endearment, etc.) part of this category?
e.g., "Hello, Tom." "Goodnight, honey." "Yessir, Captain!"
I see a lot of authors (or their editors) omitting that comma before a name in dialogue.It always looks like a mistake to me (the omission) but I don't know if it's a rule or just a practice ;-p

I've seen advice that the comma is optional when the introductory element is <= 4 words long and there isn't the potential for confusion of meaning.

DMac, yes, you're right, the short greetings before a name count too and need a comma! You have it right above. And yes, it's the rule. Hello COMMA Mom.

My mother-in-law (forty years as a newspaper editor) points this out as the most infuriating mistake she routinely sees these days. I agree! (We agree on most things, including her son. :)

Hi! If you study English but grammar rules are difficult to learn, this source is the best one to visit and learn more as well as find comprehensible materials http://royalediting.com/possessive-nouns-essential-points